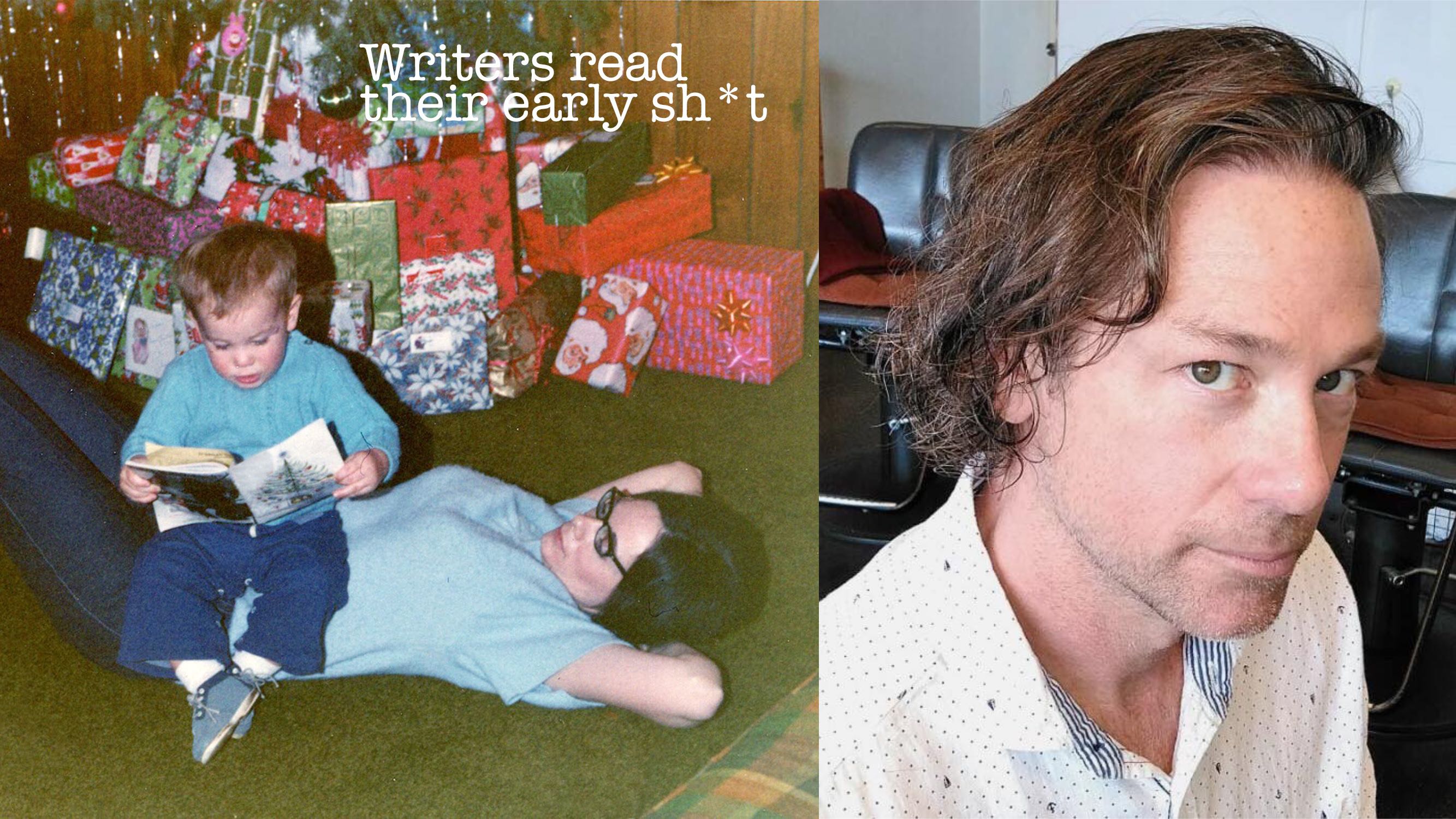 In his fun, witty and insightful podcast, Jason Emde, MFA ‘22, discusses samples of early work with guests, including other members of the UBC Creative Writing community, musicians and artists. The smooth beats of DJ Max in Tokyo round out vibrant conversations that don’t confine themselves to writing. We asked him a few questions about the podcast, which can be found on Buzzsprout, Apple Podcasts, Spotify or Google Podcasts.

What made you want to start WRTES?

My brother unearthed a poem I’d written in grade three or four about a tree and sent it to me. It wasn’t much of a poem but I read it to some writerly friends and classmates anyway:

As soon as I finished I thought, “Every writer in the world—and tons of non-writers, too—has got drawers and closets and boxes and files full of zany, inept, pretentious, aborted, weirdo projects and poems and old journals and notebooks full of the most abnormally unpromising early work—I know I do—wonder if a podcast featuring some of that stuff would work? It would at least be funny, I bet.” I knew a lot of writers and creative people and I thought some of them might get a kick out of revealing sides of themselves they generally keep hidden or buried, and that there might be some charm underneath. Charm, and maybe hints and clues, too. Plus I love the sound of my own voice, so a podcast where I got to talk to interesting people around the world seemed like a groovy idea. Especially during a pandemic.

How do you find writers for WRTES?

I’m obsessed with books and bookshelves and bookstores and notebooks and pens and desks and blackening pages so I know a lot of people who feel the same way. It was therefore a matter of reaching out to them and asking if they’d like to come on and reveal some of their early, undercooked work. Friends, classmates, professors, family members, etc. And then guests and friends started recommending other writers. I’ve also been boldly inviting famous and quasi-famous artists, on the principle that you miss 100% of the punches you don’t throw.

How do you put guests at ease?

Hopefully they’ve listened to the show and know that, though it can be embarrassing, it’s not malicious. I also let them know right away that I can fix all kinds of things in the edit, and that they’ll get a chance to hear a preliminary edit before I release anything. That takes a lot of pressure off, I think, but it’s more than just wanting to put the guest at ease: I want the very best version of our chat to be the one people hear. Most of the guests so far have been happy with the edit I send them, and only two or three have asked for something—always something minor—to be cut out, usually to avoid hurting somebody else’s feelings.

What is the value of early work?

At first I thought that sharing early stuff would just be funny, but the more I think about it the more levels and layers and possibilities and meanings I find in it. For the artist, I think it’s valuable as a way to, as Joan Didion put it, “keep on nodding terms with the people we used to be, whether we find them attractive company or not…We forget all too soon the things we thought we could never forget. We forget the loves and the betrayals alike, forget what we whispered and what we screamed, forget who we were.” That’s from her beautiful little essay ‘On Keeping a Notebook,’ from Slouching Towards Bethlehem. Early work—old notebooks, journals, poems, short stories—can function as a portal back to somebody we used to be, if only to see how much better we’ve gotten, how much we’ve learned. It can present an opportunity to unleash a little tenderness on yourself.

Looking at early work also provides a chance for the guests to ask themselves questions like, Why, exactly, do I find this embarrassing? What am I doing in this early poem that I would never do now? What did I do better then than I seem to be able to do now? And is there any material lurking in there that I could use? I think sharing early work is a way to make yourself more human and lovable and less that mysterious, mystically-talented dab hand genius who creates beauty out of nothing in his poetical and candle-lit tower of song or whatever. For listeners, whether or not they’re artists themselves, it can be liberating to see someone whose poems or novels or songs or movies you really admire share some early flop with humour and compassion. It helps us forgive ourselves for our own flops and debacles, I think.

To what extent is each episode planned? Is it difficult to adapt to what a guest is saying?

If the guest has published a book, I’ll read it to get a sense of their style and to get ideas for questions. Then I’ll write out the intro. Except in one case—my pal Shea sent me the unfinished screenplay we were going to read together on the show—I never see the early work the guest is planning to share; it’s way better if it’s a surprise to me. It’s ace when it’s a surprise to the guest, too, who sometimes hasn’t seen it since she wrote it decades before. The guest then reads or plays and we talk about it or about writing and creating in general. This is where the chat sometimes veers off. There’s an old Buddhist story about a man on a horse who gallops past a monk. The monk shouts after him, “Where are you going?” “Ask my horse,” the man replies. I’m that man, sometimes, and the show’s the horse, and those are my favourite episodes.

How has the podcast evolved over time, and what’s in store for its future?

The format hasn’t changed all that much—it’s loose enough that it doesn’t have to, maybe—though it’s opening up a little to include more non-writers: musicians, graphic designers, actors. My pal Lee Shedden is always pushing me to probe deeper and find out things like how my guests approach their early work, and what they’ve learned since, and why did they choose any one particular piece of early shit to share, and so on and so forth and he’s totally right. The show can still be funny without being superficial. But that would be a refinement rather than an evolution, I think. Boringly, the biggest changes have probably been technical: better sound, better editing, etc.

What’s in store for the future? More and more cool tracks from DJ Max in Tokyo, who does all of the music for the show, followed by a hundred million dollar contract with Spotify and fame and glory and Hollywood parties and dual Nobel prizes for literature and podcasting. Probably.

How can writers get in touch with you if they’re interested in being guests?

There’s a Facebook page—Writers Read Their Early Crap, because Facebook objected to the utter filthiness of Shit—and an Instagram page, too, which is titled properly. Interested writers and artists could also send me an email at WritersReadTheirEarlyShit@gmail.com. I’m not that hard to find. 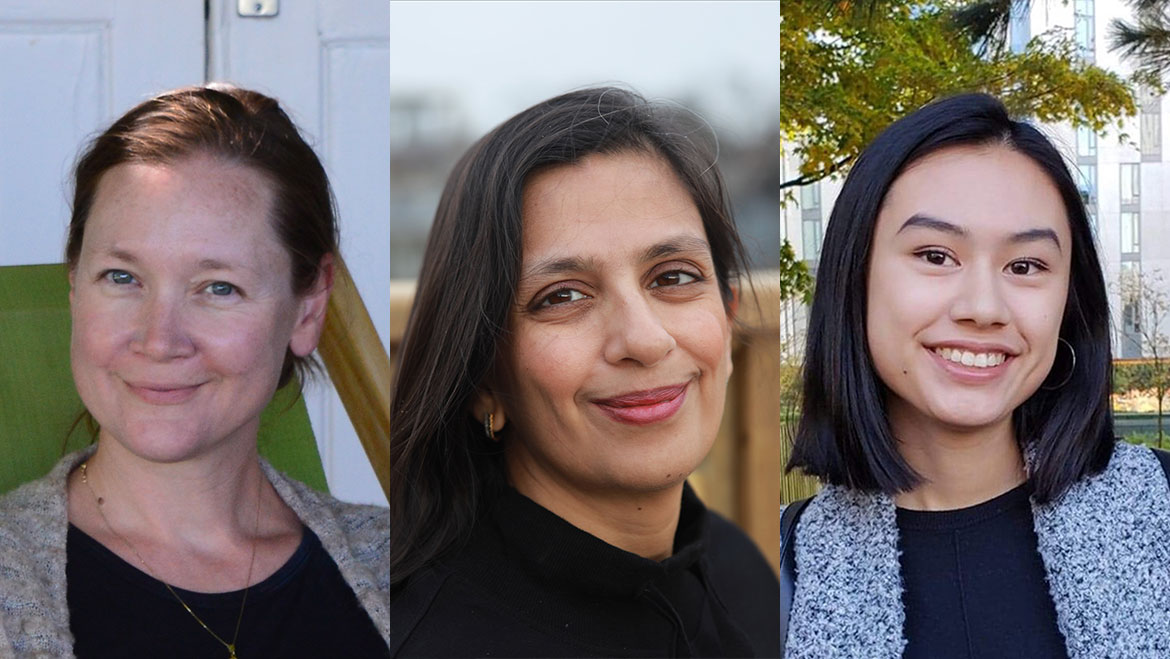