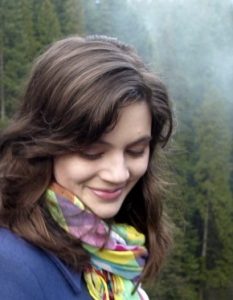 Ruth Daniell is a writer, artist, and performer originally from Prince George, BC. She now lives in Vancouver, where she teaches speech arts and writing at the Bolton Academy of Spoken Arts and runs Swoon, a literary reading series on love and desire. She holds a BA (Honours) from the University of Victoria and her MFA from the University of British Columbia. Her writing appears in literary journals across North America, including The Malahat Review and Room, and has been twice longlisted for the CBC Canada Poetry Prize. Recently, she has been honoured in Contemporary Verse 2 as a runner-up for the 2013 Young Buck Poetry Prize, by inclusion on the shortlist for The London Magazine’s 2014 Poetry Competition, on CBC as the winner of the 2014 Shakespeare Selfie Challenge, and through One Throne Magazine as a nominee for the Pushcart Prize.