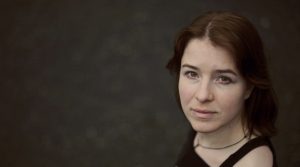 Jordan Hall is an emerging artist whose work has been dubbed “stellar, insightful”by Plank Magazine, “thoughtful” by CBC Radio, and “vivid, memorable” by NOW. Her first full-length play, Kayak, won Samuel French’s 2010 Canadian Playwrights Competition, and has been produced to critical acclaim across North America. An Associate at Playwrights Theatre Centre from 2010-2013, she is currently Touchstone Theatre’s 2016 Flying Start playwright, and her most recent play, How to Survive an Apocalypse, will premiere with Touchstone in 2016. As a screenwriter, Jordan co-created the CSA-nominated Carmilla: The Series for SmokeBomb Entertainment. She has also been a finalist in both the LA Comedy Fest and Beverly Hills Short Screenplay Competitions, as well as a winner of the Crazy8s Short Film Production Competition. As a dramaturg, Jordan worked on The Hearing of Jeremy Hinzman at the 2012 Summerworks Festival, and spent five years as a mentor for UBC’s Booming Ground program.