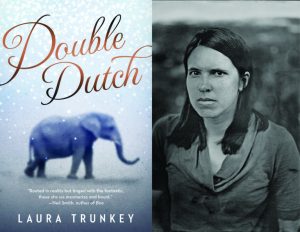 Laura Trunkey’s writing has been published in journals and magazines across Canada. Her short fiction has been anthologized in the bestselling collection, Darwin’s Bastards: Astounding Tales from Tomorrow and her non-fiction has been anthologized in Hidden Lives. The Incredibly Ordinary Danny Chandelier, Laura’s children’s novel, was a starred selection in the Canadian Children’s Book Centre’s Best Books for Kids & Teens. Her short fiction collection, Double Dutch, was released in March 2016 by Anansi. Laura graduated from the UBC CRWR MFA program in 2009.

Hi, I’m Laura Trunkey. I’m originally from Victoria, BC and have called Vancouver Island home for most of my life. I entered UBC’s OptRes program in 2006‚ quite a departure from my Social Work degree, but a great decision. My first book, the children’s novel, The Incredibly Ordinary Danny Chandelier, was published in 2008. I began the book in 2005 with the intention to write a couple chapters for my UBC portfolio. I workshopped the entire book in my writing for children class my first year of the program, back when there were classes of only four students and lots of submission dates. My short story collection, Double Dutch took considerably longer to make its way into the world. The oldest story in the collection was written a decade ago.

Could you tell us a little about your short story collection?

Double Dutch¬†is a collection of nine stylistically varied short stories. In the title story, Ronald Reagan’s body double falls in love with the first lady. Topsy, the elephant on the book cover, relives her past during her Coney Island execution. In other stories biblical miracles are performed, animals communicate or share bodies with humans, and spirits tend to the souls of the dying. It was published by House of Anansi’s short story imprint, Astoria, in March, 2016.

What was the process of writing your collection?

About half of the stories were written during my time in the Optional Residency program and became part of my MFA thesis in 2009. In fact, the manuscript I submitted to Anansi didn’t look much different from my thesis collection. The book was accepted in December, 2013, but because it wasn’t slated for publication until 2016 I had over a year before starting work with my editor, Janice Zawerbny. I used that time to write new stories to replace ones I was no longer happy with.

Why did you choose to write about what you did?

Most of the stories are a result of my obsessiveness. When I discover something I consider fascinating, I usually attempt to learn everything I can about the subject. Then I feel the compulsion to share. Some obsessions that have made their way into Double Dutch¬†are political doubles, blastocysts, Edison’s animal experiments, xenoglossy, mountain goats, a trial held in Edmonton in 1917. A reviewer recently wrote about a thematic link between most of the stories in my collection, but I have to admit I didn’t plan for that, nor am I convinced it actually exists. My favourite short story collections are varied in both form and subject, and I consider Double Dutch to fit that description.

What is one of the most important lessons you’ve learned about writing?

The willingness to revise and revise and revise again is so much more important than the quality of a first draft. And while the act of writing is solitary, when it comes to revisions, help‚ at least for me, is so valuable. (One lesson I’m trying to learn is that eventually I have to stop revising. Every time I read through a draft I’ll find more things I want to change. It’s hard for me to just say: enough!)

The greatest gift the program gave me were the friends I made. I have a wonderful online writing group right now. Five of us were classmates our first summer at UBC in 2006, the sixth member‚ Matthew J Trafford, is a phenomenal writer I was put in contact with before I entered the program, when I was trying to decide whether to study on campus or go the optres route. He convinced me to choose the latter mostly by describing how the summer residencies are like adult summer camp, except with laptops rather than canoes. He’s now the first reader of all my fiction (and his book The Divinity Gene‚ is a must-read). Zsuzsi Gartner, my thesis advisor, is an incredible mentor and champion of short fiction. I was so privileged to learn from her, and to be pushed far out of my comfort zone. I didn’t have any writer friends before UBC. Writing was a lonely thing I dreamed about doing. At UBC, I found my tribe.

Is there something people may not know about you?

There’s a lot people don’t know about me. I’m not on Facebook or Twitter, and isn’t that how people get information these days? I played the cello from when I was three until when I was 19. I often considered building a life that revolved around that instrument, but I wasn’t obsessed enough. And though I love music, I’ve always loved books a little bit more.

What are you working on now?

New short stories, a half-written mid-grade novel, a YA novel in the final stages of revision, an adult novel that’s just taking shape in my brain. My problem isn’t coming up with ideas, it’s choosing one to focus on and seeing it through to the end.

Are you doing any upcoming readings you would like to promo?

I’m doing a little Vancouver/ Victoria/ Nanaimo tour in July, and I’ll be reading at a short fiction event in Toronto in October but none of the details are firmed up yet. When they are, they’ll be up on my website. www.lauratrunkey.com

You can purchase Double Dutch from Anansi, Indigo, Amazon and your local bookstore.

Francine Cunningham is the social media executive for the UBC Creative Writing Alumni Association. What does that mean exactly? She is on the Twitter, Facebook, Goodreads accounts and our blog, posting information about our alumni, events and news. She also runs this interview series Featured Alumni and loves being able to get to know the people who make this association what it is. For more information about Francine and her writing find her at www.francinecunningham.ca.