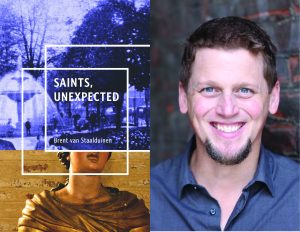 Brent is the writer of Saints Unexpected, his work has appeared in Event, The Puritan , Prairie Fire and others.He is a graduate of the Humber School of Writers and holds an MFA in Creative Writing from UBC. Find him online at www.brentvans.com.

Could you tell us a little about yourself?

Hello. My name is Brent van Staalduinen, and I graduated from the UBC Creative Writing MFA in September 2015. In addition to writing, I work part-time at the Hamilton Public Library, and do my best to parent two amazing girls: Nora, aged 3, and Alida, aged 4 months. I’m a foreign-service brat, so my childhood was mobile: I was born in New Delhi, and raised in Ottawa and Chicago. I now live in Hamilton, Ontario, and consider it my home and the place that I find my voice.

Could you tell us a little about your novel?

SAINTS, UNEXPECTED was published in April 2016 by Invisible Publishing, and tells the story of Mutton, a woman who has decided to recount the life-changing events of her fifteenth summer, a summer of violence, heartbreak, grief, and magic.

What was the process of writing your novel?

It began years ago when Mutton wrote her way into a short story and then refused to leave my head. Although outlined, character-sketched, and brainstormed ahead of time, the novel was drafted first as part of National Novel Writing Month (NaNoWriMo), and then was subjected to about a year-and-a-half of editing.

Why did you choose to write about what you did?

Mutton is stubborn and wouldn’t let me forget her. I’m also intrigued by the supernatural, speculative, spiritual, and magical things that move beyond our perception of reality, which is how The Niche worked its way into the novel. I also really dig magical realism’s ability to make plain‚ the fantastical or supernatural.

Where do you get your ideas for fiction from?

What is one the most important lessons you’ve learned about writing?

One is too hard. Here are nine:

Keep reading.
Ass in chair. Write, write, write.
Revise.
Join a small writing group where everyone is better than you and pay attention to what they say.
Revise again.
Submit, submit, submit.
Don’t wait for anything too long, and always have another project on the go.
Become best friends with rejection.
Repeat.

In four ways. First, it created deadlines that demanded I write, and so I produced a pretty great body of work, from which a number of pieces have been published in literary journals and magazines here and abroad; second, it introduced me to a bevy of amazing writers‚ from faculty to student‚ from whom I draw inspiration and support; third, it has given me an MFA, which enables me to teach at Redeemer University (my alma mater) and forces me to keep writing to practice what I teach; finally, it has encouraged me to learn more about all the facets of the Canadian Literature scene, from drafting to publishing to promotion, and everything in between.

Something people may not know about you?

I was a gold level marksman in the Canadian Armed Forces. And I achieved this distinction as a medic, which pissed off all the guys (and yes, back then it was all men) in the combat trades, who figured shooting well was their God-given right.

What are you working on now?

As I write this, I’m in the middle of my book tour, so promotion and readings are occupying my energy right now. Writing-wise, my agent Olga Filina and I are also working on revisions to BOY, my thesis novel and the work she’ll be presenting (along with a short story collection and an outline for my next novel) to publishers later in the spring or early summer.

Are you doing any upcoming readings you would like to promo?

Yes! Guelph on April 27, Toronto on April 28, Stratford on April 29, and on the 30th I’ll be doing Authors for Indies at two local Hamilton bookstores.

I’ll also be in BC from July14-19, including launches in Victoria and Vancouver, as well as participating in a fiction panel at UBC for the MFA OptRes summer residency.

Finally, from November 4-6, I’ll be participating in The New Quarterly‚ Wild Writers festival.

There’s bound to be more happening as the season moves forward, so bookmark www.brentvanstaalduinen.com/events and watch for more details and specifics.

Francine Cunningham is the social media executive for the UBC Creative Writing Alumni Association. What does that mean exactly? She is on the Twitter, Facebook, Goodreads accounts and our blog, posting information about our alumni, events and news. She also runs this interview series Featured Alumni and loves being able to get to know the people who make this association what it is. For more information about Francine and her writing find her at www.francinecunningham.ca.