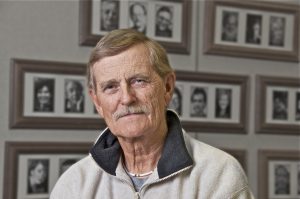 David A. Poulsen has been a broadcaster, teacher, rancher, high school football coach, stage and film actor and‚ most of all‚ writer. His writing career began in earnest when his story The Welcomin’ won the 1984 Alberta Culture Short Story Competition. Now the author of more than 20 books, many for middle readers and young adults, David has been a popular and much sought-after presenter for all ages and grades schools and at teacher and library conferences for the over two decades. He recently completed his Masters degree in Creative Writing at UBC and in 2012-13 was the Writer in Residence at the Saskatoon Public Library.

In 2011 David’s young adult novel Numbers was selected for the Sakura Medal (awarded by English speaking high school students in Japan to their favourite novel of the year). As a result he was invited to tour International Schools in Japan and Korea in the fall of 2011. Numbers has since been added to the new English curriculum for Grade 10 in Saskatchewan. His 2013 teen novel, Old Man, a YA/Adult crossover novel was a nominee for the White Pine Award in the OLA’s Forest of reading competition. David’s most recent novel, Serpents Rising, his first foray into adult crime fiction and first title in the Cullen and Cobb Mystery series, was released on October 25, 2014. The native Calgarian divides his time between his small ranch in the Alberta foothills southwest of Calgary and a second home in Maricopa, Arizona.