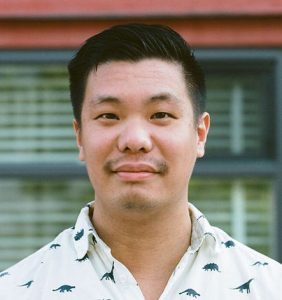 Aaron Chan is a musician, filmmaker, and writer born and raised on unceded Coast Salish territories (Vancouver). He holds a BFA in Creative Writing from the University of British Columbia, and his writing has been published in literary magazines and publications including Plenitude, filling Station, Polychrome Ink, and Xtra. His piece “A Case of Jeff” won subTerrain‘s Lush Triumphant Literary Award in Creative Non-Fiction, and he has published a poetry chapbook, ROMANTIC HOPELESS. His first book, THIS CITY IS A MINEFIELD (Signal 8 Press), is a collection of memoir and personal essays.

How did your time in the Creative Writing Program influence your work?

My debut book, a memoir collection about growing up gay and Chinese in Vancouver titled THIS CITY IS A MINEFIELD (Signal 8 Press).

I am connected to some other BFA alums.